Bay Concert Band performs four concerts a year in Bay City Central Auditorium, as well as a summer concert as part of the Summer Music Series at the World Friendship Shell in Bay City’s Wenonah Park on the banks of the Saginaw River.

BCB has performed at the Tall Ship Celebration and traveled to play in Goderich, Ontario, Bay City’s sister city, as well as at the Maple Syrup Festival in Shepherd, Michigan. It has performed joint concerts with Midland Concert Band and the Mid-Michigan Concert Band, and has played an inaugural concert in the new Standish-Sterling High School Auditorium. Members of the band also have enjoyed performing as a 1920’s-era small-town band at the River of Time celebration on Bay City’s waterfront. 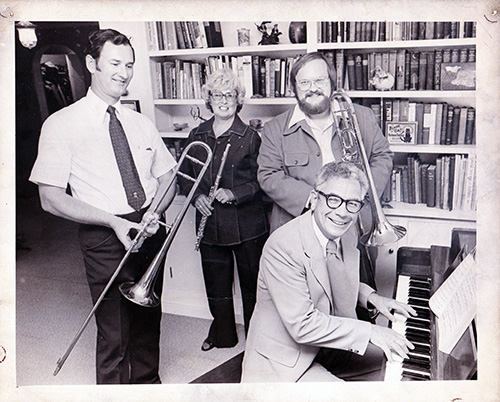 Bay Concert Band was the brainchild of Peg Rowley, Dr. James Fenton, James A. Griffiths and Walter Cramer. They placed two articles in The Bay City Times requesting former band students who had graduated from high school to come to the Bay City Central band room to organize a community band. Seventy-seven musicians attended the first rehearsal in September 1977, under the direction of Walter “Wally” Cramer, and the band has been active ever since. Bay Concert Band is now in its 39th season of providing a place for recreational musicians to continue playing after they graduate from an organized school program. The band includes members 18 to 80+ years of age and from all walks of life.

Bay Concert Band has been led by five conductors since its inception: Walter Cramer directed the band for the first five years; Robert Story was appointed in 1982 and served for 14 years; David Kjellberg was chosen as the band’s third conductor in 1996, and upon his retirement, the baton was briefly passed to Leo Najar for the 2010-2011 season. Peter Makar Jr. IV took over in 2011 to continue the tradition.

One of the primary purposes of Bay Concert Band is to promote continuing music education. The untimely death in 1984 of Dr. Peter McGee, who was a charter member of the band, led to a memorial scholarship that was established to help students in their musical endeavors. The band has continued this scholarship to assist with costs of attending summer music programs and has expanded it to provide musical instruments for local school bands.

BYLAWS OF THE BAY CONCERT BAND

Permanent link to this article: https://bayconcertband.com/about/